This is a very special release for me.

For starters, this will be the first song I've released that is my own production from start to finish. For me, whose lived most of my life as an absolute perfectionist, that's a huge feat! Carrying that mindset has stopped me from releasing loads of music in the past and I'm excited that this is a milestone in the right direction. "Sea Key" is perfectly imperfect and I've learned to enjoy that the most. I've taken chances with this one, gotten out of my comfort zone, and laid it on the line, risk and all, believing for a warm reception. Already, just from posting teasers, you have been so kind. Thank you.

Another reason this one is so special is that it's the very first instrumental I will have ever released, to the best of my knowledge, in my entire musical career to date. There's something so powerful about music doing the speaking. To me, it allows for the listener to be moved in whatever way they need to be at that specific moment. I remember the intro of the song "Clocks" by Coldplay. It would transport my mind into a pensive state of wonder even in the brief few seconds it played before the vocals kicked in. Of course, the whole song is amazing, but those musical breaks really drove it home for me. Obviously, I'm a singer/songwriter, and most of my music includes a lyrical message, but I believe it's healthy for one's creative well being to venture away from the box sometimes into the unknown. We, the listeners, have the privilege of joining the venture, and to wander the fields of amazement with the artists painting the sonic landscape. What a joy!

Thirdly, why Sea Key is so special, is that it's the first release of a series of instrumentals created with film in mind. Music by itself is incredibly moving and powerful, but coupled with the right imagery, the two can be an awesome force. When you're hoping to communicate a specific message by video, choosing the right music is crucial. Cinematic soundscapes, in my own style, are at the heart of all my music. This series of instrumental songs, I'm affectionately calling "CineSounds", are specifically geared to be that "perfect" song to match the emotion film makers are working to convey. With this, I am now offering music for licensing straight from http://heriammusic.com/licensing.

I could go on, but I think you get the point. Sea Key holds many firsts for me as an artist. Like, did I mention, that it's the first time I've allowed myself to play an extended guitar solo on a recorded piece? Ya, it happens in this song! To me, this one is flinging the door of possibilities wide open. I'm allowing my songwriting, production, creativity, and everything else going into this release to be seen for what it is..just simply me making music I'd want to listen to. I hope you enjoy listening to it as much as I enjoyed creating it.

All glory to God who gives the dreams, equips with the ability, provides the plans, and builds the house. If He's not building it, we the builders build in vain.

Be blessed everyone,
Christian Ross (Heríam)

To find out more about me and the music I make, visit http://heriammusic.com

I’m giving away my latest single free when you join my mailing list
CLICK HERE >>> http://heriammusic.com/freemium
As an artist, I create music to encourage and edify in Christ Jesus. All support is appreciated and I'm so grateful. Contribute to my calling by filling up my Tip Jar!
👇👇👇
https://paypal.me/pools/c/84UWvhehrn 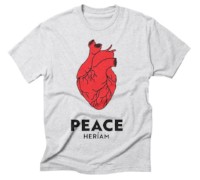 CHECK OUT MY SHOP!

Visit the Heríam Shop for all kinds of merch and goodies designed by yours truly.